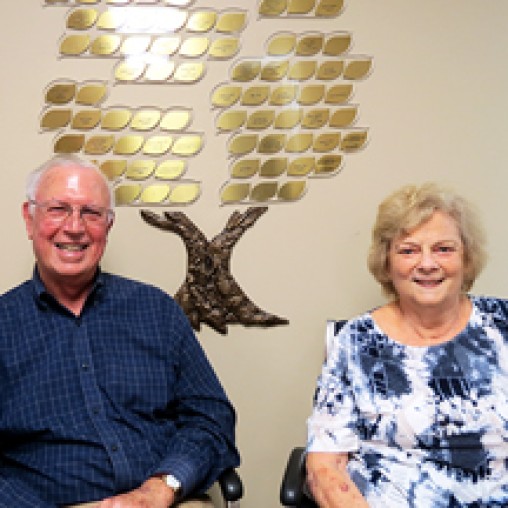 Linda and Mike Miller, honorees from Congregation Keneseth Israel, met at Penn State more than 55 years ago. They said their initial attraction was noticing the kindness in each other. KI and the Lehigh Valley community have benefitted from their kindness and commitment to Tikun Olam. They support the Jewish Community Center, the Jewish Federation, the Jewish Day School and Jewish Family Service. Honored at the 1997-98 KI Gala, the Millers served as fundraising co-chairs for KI’s 1988 building expansion that generated enough money to create a multipurpose room, Religious School Wing, expand the library and remodel the social hall. Linda is a past-president of the congregation and Sisterhood and is an active weekly volunteer in the KI office. She taught second grade at the Jewish Day School for 18 years. Mike serves on the KI Endowment Foundation Board and Jewish Federation Board, chairs the Jewish Federation Endowment Investment Committee, has served in numerous capacities in the KI’s Brotherhood and on KI’s Board of Trustees and was on the Allentown Commercial and Industrial Development Authority. He is a partner and shareholder Emeritus of Concannon Miller CPA. Mike claims to be a founding member of the Frequent Prayers Club – attend five services and get one free. He also credits KI’s Brotherhood for teaching him how to make 12 dozen eggs at a time, but can’t cook less. Mike’s jokes keep us smiling. The Millers’ partnership in the community resonates with the word spectacular!

Mazel tov, Linda and Mike, two of our Spectacular Over 70 honorees.