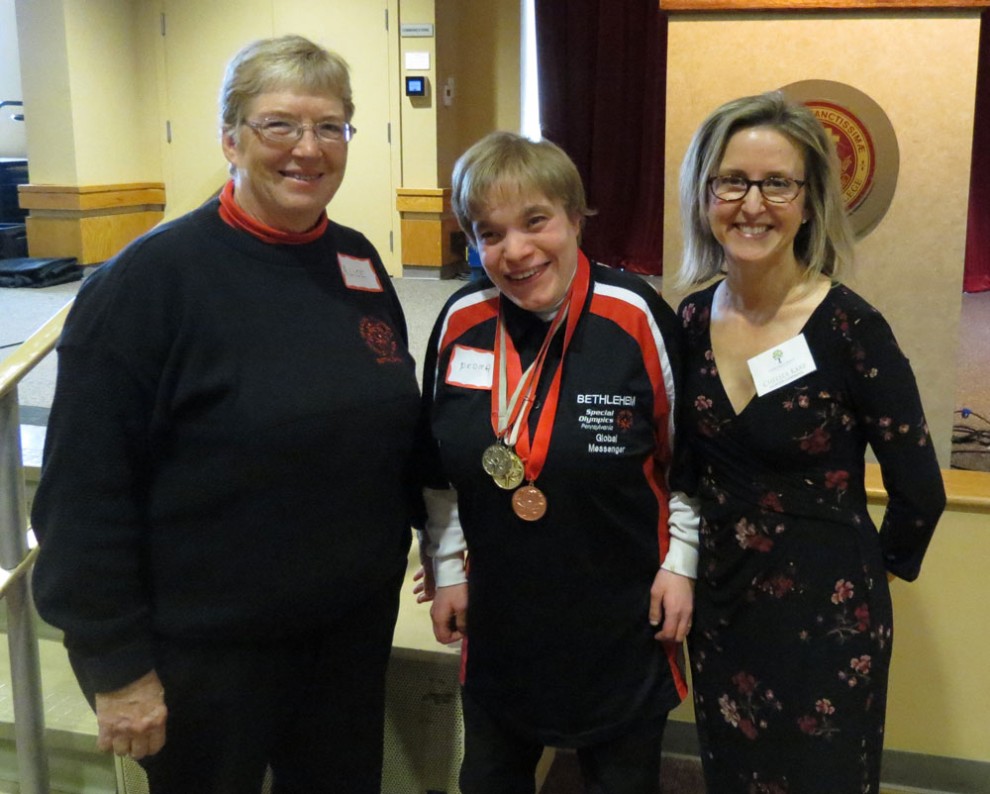 Over 40 people gathered in Muhlenberg College’s Seegers Union on the afternoon of Sunday, Feb. 23, for the Jewish Disability Awareness & Inclusion Month Community Event sponsored by Jewish Family Service. Rebecca Axelrod-Cooper, community impact coordinator for JFS, welcomed the audience to the program, which included a screening of the 2017 documentary “Swim Team.”

“We realized we couldn’t include the vast diversity of disability with just one film,” she told them, “so we chose one that shows what is possible when you give kids with disability the chance to be included.”

The documentary tells the story of the Hammerheads, a swim team in New Jersey made up entirely of teens on the autism spectrum, who compete through Special Olympics. The movie followed the challenges and triumphs of the team collectively, as well as focusing on the lives of three individual young men on the team. It also highlighted the challenges of the parents navigating a world which is not always supportive or inclusive of their children.

The showing of “Swim Team” was made possible by a partnership with ReelAbilities International, an organization which organizes film festivals and programs showcasing films by, about and for people with disabilities.

After the film, special guest Alice Moat, state sport director of swimming and co-manager of the Bethlehem Special Olympics, another partner for the event, spoke to the audience on the impact that Special Olympics makes for those who participate.

“Special Olympics is a great organization that provides training and competition in Olympic-type sports to athletes at all ability levels, at no cost to the athletes or their families, or to the spectators at our events,” said Moat. “We provide opportunities for children and adults with disabilities to grow in physical fitness, courage, joy and the sharing of their gifts. The social aspects that are learned through sports competition are just as important as the physical. Many of our athletes go on to be health and fitness coordinators, coaches, officials or Global Messengers.”

Moat then introduced one of her athletes, Dedra Sobol. Over the past 20 years, Dedra has partcipated in swimming, rhythmic gymnastics and soccer skills. Sobol is a Global Messenger who spoke to the crowd about her experience with Special Olympics and what it has meant to her.

“Starting to swim with Special Olympics began the best experience in my life,” declared Sobol. She expressed that her participation has given her the chance to “get to do what I love, make lots of friends, and have coaches like Alice who are always kind and helpful.”

“We know as we stand here on the 30th anniversary of the Americans with Disabilities Act, we still have much to do,” said Karp. “That is why we at JFS very much like to heed the phrase which is a slogan of the disability rights movement, ‘Nothing About Us Without Us,’ as we are committed to continuing the conversation of how we can make our community inclusive for all.”

If you or a family member has a disability and are interested in helping to shape disability awareness and inclusion programming in the Jewish community, JFS invites you to have a seat at the table. Please contact Rebecca Axelrod-Cooper at 610-821-8722 or racooper@jfslv.org.