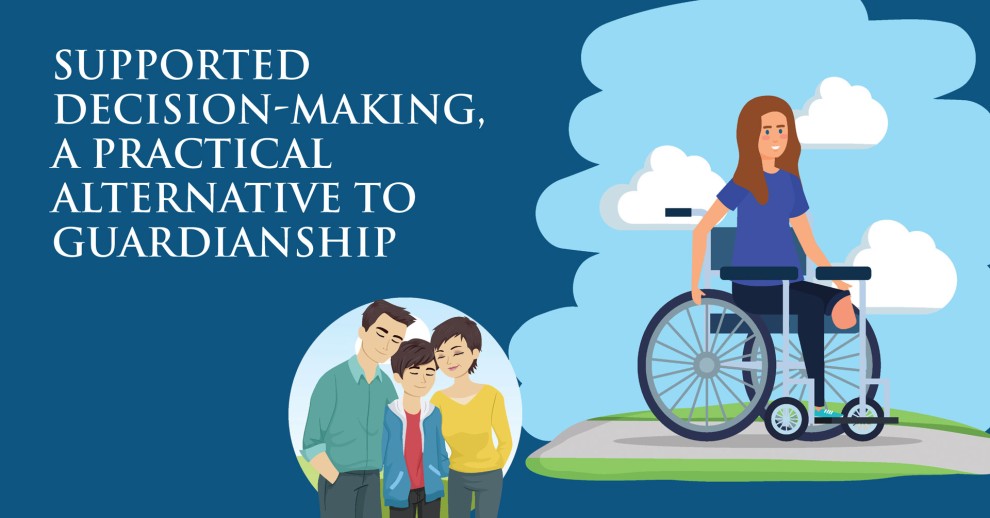 Supported Decision-Making is based on the belief that all persons have the right to make their own decisions and to the supports that make that possible. Decision makers can be supported by trusted friends, family members, professionals and others. This can provide an alternative to guardianship, which strips away the decision maker’s right to make decisions for themselves. SDMNY explained that participants in their program go through steps to make a formal Supported Decision-Making Agreement with their chosen supporters. While not yet law in Pennsylvania, the hope of the presentation was to garner enough interest in support to begin the process of bringing it to here.

SDMNY’s Joan Cornachio, site coordinator, and the Hon. Kris Glen, project manager, gave a brief introduction to the treatment of individuals with disabilities in the United States, leading up to 2014 when SDM was first created.

“The reason that SDM is an alternative to guardianship is that if people use SDM in order to make their own decisions and they’re not placed under guardianship, they keep all their rights. They never lose their rights. They might not always make all the right choices, but the way we all learn is through the choices we make. It’s really important people not have their rights to make decisions taken away from them despite whatever diagnosis they may have, so they can continue to grow throughout their lives,” said Cornachio.

Glen explained that over the last few years, “SDM has become very mainstream,” emphasizing that the federal government supports it through its programs. SDM is currently legally recognized in only 12 states.

Participants were shown a video entitled “Why Supported Decision-Making?” featuring several decision makers sharing what SDM means to them. One mother said, “None of us make decisions in a vacuum.” This sentiment was echoed throughout the presentation, as the process of SDM was compared to how all people make decisions all the time by consulting friends, family and experts for their opinions. This is very much what Decision Makers do through SDM, by choosing which areas of their lives they’d like support for and then choosing advisors they trust to support them in those areas.

After a quick Q&A with the first two presenters, one of the first two signers of the SDMNY program, Andrew Drobenko, and his supporter/mother, Larissa Baczyk, also spoke to share their first-hand experience.

“Since I signed my agreement, I feel free and happy that I can share my experience and help other people with disabilities. SDMNY gave me my independence, and I can have people look at me as a person who can make his own decisions,” said Drobenko.

“I chose my mother, brothers and cousins to be my supporters because they are the people who knew me from day one, and I trust them ... None of them tell me what to do, but educate me in areas and go over pros and cons. It is such a good feeling knowing I have people to support me now and in the future,” he added.

His mother agreed that SDM was a huge positive in Andrew’s life.

“When I heard of SDMNY, it was a relief. It was a huge burden off my shoulders, and I knew immediately that’s what I wanted for Andrew,” Baczyk said. “I was taking on a new role. I was no longer just Mom, now I am taking on this new role for him as his supporter, to now take that step back and not make that decision for him. He has become so much more independent, and he has taken initiative with helping me.”

JFS has been working with LVCIL since May to determine the interest in SDM and ways to bring it to the community.
JFS is also set to host “Disability Pride vs. Disability Fix” on Feb. 28. In addition to these programs, staff also participated in virtual events as part of the Jewish Federations of North America’s Jewish Disability Advocacy Month.

Recordings of both programs will be available at jfslv.org. Please contact Rebecca Axelrod-Cooper at racooper@jfslv.org with any questions.