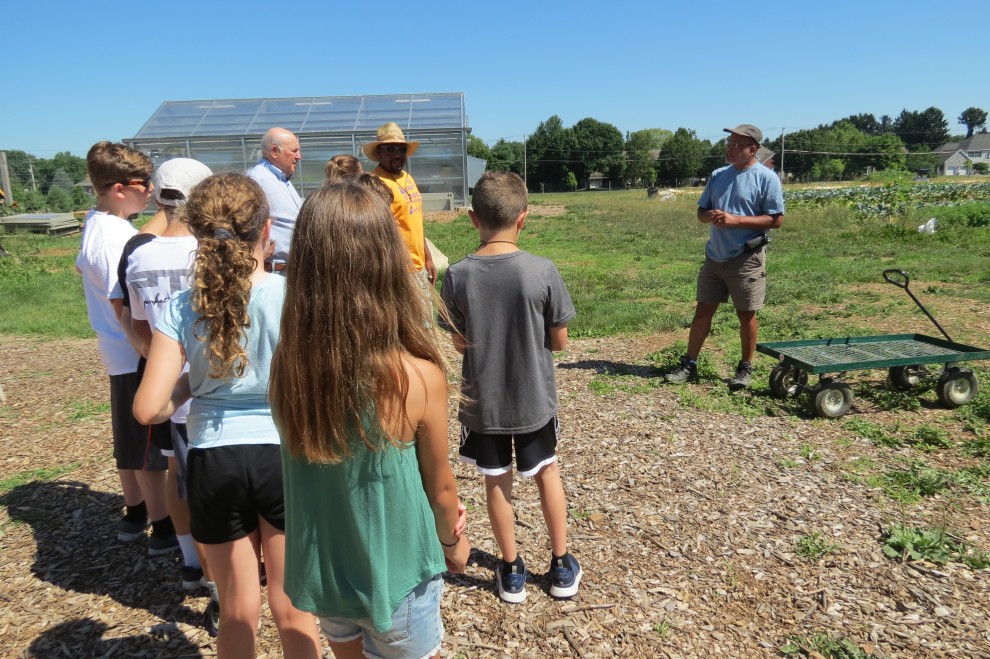 On a hot morning in July, campers from the JCC joined with Jewish Family Service volunteers to harvest food for people in need as part of JFS’s Plant a Row initiative.

The children traveled to Monocacy Farm in Bethlehem, an organic farm run by nuns that has one section for a farm share program and another for donation. They were met by farmer Bob Drake, who told them about the history of the farm before taking them on a tour. In the shed, the kids tried kale, the first vegetable they would be harvesting; they then saw the greenhouse, where the plants begin their lives, and the fields with different kinds of crops.

JFS volunteers Albert Derby, who delivers food from Monocacy Farm to the JFS Community Food Pantry once a week, and his wife Eva, who volunteers in the pantry, told the kids about how their volunteer jobs work and what a difference their contributions were making.

The kids were then given their instructions: to pluck the largest leaves of kale from the bottom of the plants, place them in a basket, and then return to the shed to wash the leaves once they were done. The kids later harvested cabbages and scallions with a similar process. Other vegetables JFS clients will receive later in the season include tomatoes as well as hot and sweet peppers.

During the harvesting, the kids eagerly asked questions and munched on fresh kale. “The kale is really fresh and good,” one boy said. “It’s generous that [Drake] is taking all the kale and giving it away” to people in need.
Everything the kids harvested was brought to JFS by Albert Derby the following day.

In the end, the project was about doing a mitzvah and serving others. “You should see the happiness on the faces of the people we serve because they’re getting fresh produce,” Eva said.