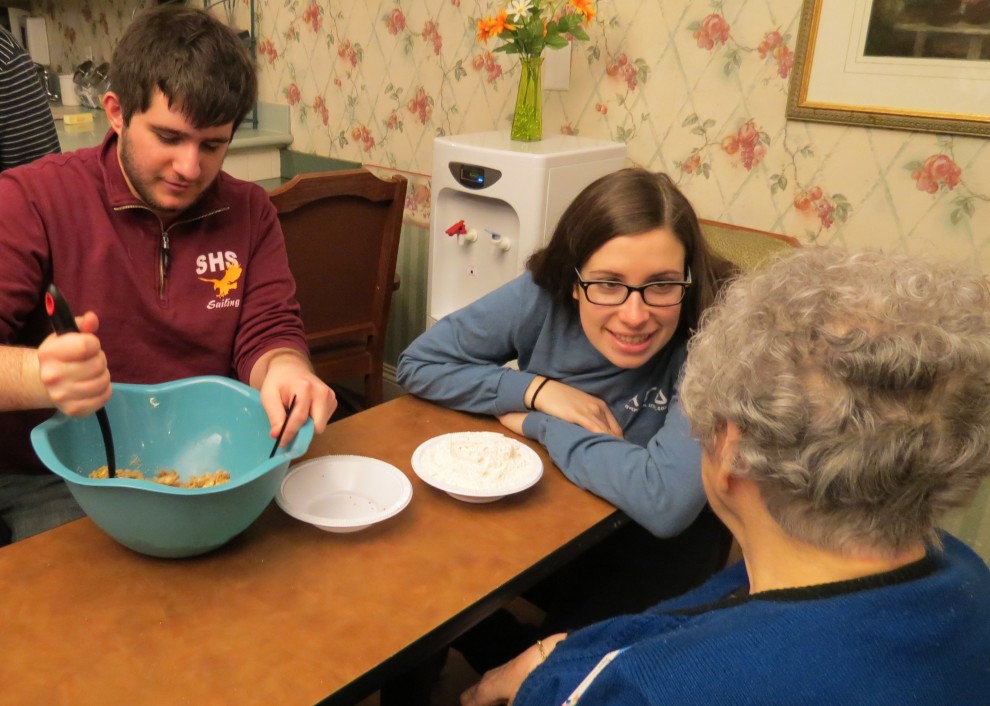 Over two dozen volunteers gathered at Atria Bethlehem on Jan. 29 to bake a recipe that resident Gloria Nelson remembers from her Aunt Lil. The chocolate cake was a staple at her family’s celebrations, and as part of a community-wide mitzvah project in partnership with the Jewish Federation of the Lehigh Valley on Super Sunday, Jewish residents of Atria were able to enjoy baking and eating the old family recipe.

Nelson baked the chocolate cake for every one of her children’s special occasions, using different molds to match the mood. For birthdays, the cakes took whimsical shapes like trains, and for bar mitzvah ceremonies, she created Torah-shaped cakes. The recipe was an important part of her family life, but as time went by, she baked it fewer and fewer times, finally placing the recipe in a box that she unearthed while receiving a visit from JFS staff.

As Nelson dug through the recipe boxes, she found recipes she had cut out from magazines and never used, recipes she had loved throughout the years, and plenty in between. The chocolate cake was the most special one, however, and this prompted her to give JFS the recipe and enable a group of residents to bake their own cakes.

In addition to helping the residents during the project, volunteers arrived early to wash new utensils, prepare and pre-measure the ingredients and listen to Gloria’s story and a brief orientation from Carol Wilson, clinical coordinator of older adult services at JFS.

The residents arrived to find everything ready in Atria’s kitchen. After splitting up into two groups, everyone was given the opportunity to combine the ingredients and mix them up before placing the cakes in square molds. After the cakes went in the oven, it was time to eat, and everyone enjoyed the delicious cake. A sugar-free angel cake and fresh strawberries rounded out the menu as the residents and volunteers took time to schmooze.