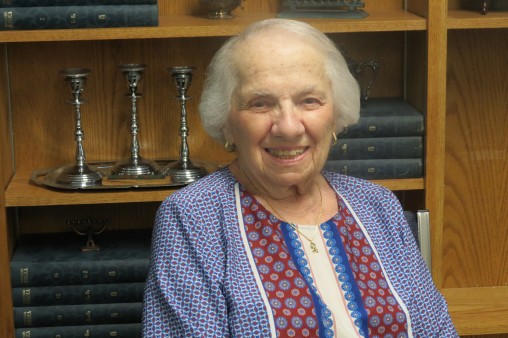 Renee and Frank Gittler, along with their two young sons, moved to Allentown in 1958, when Frank accepted a position at Bell Labs. They were immediately involved in the Jewish community. Renee became involved with the JDS PTA board, served as an officer on the Temple Beth El Sisterhood Board, and the local chapter of American Jewish Congress board. She is a life member of Hadassah. Renee was a den mother of her third son’s Cub Pack from the JDS. Before the birth of her fourth child, a daughter, she completed certification courses in secondary education. She taught chemistry classes at the local colleges and did long term subbing at various secondary schools but continued volunteering. In 1975, she was asked to join the faculty at Penn State LV and retired in 2002. She became certified as an Appraise Counselor in 2000 when her husband died. He had been a counselor since 1989 and she wanted to continue his work helping people with Medicare and Medicaid courses. She is still working at LVAL every week. Renee was part of a B’nai Mitzvah group at Congregation Brith Sholom in 2010. She continues regular attendance and classes. In 2014, she was recognized as an Unsung Hero by Lehigh County. She enjoys spending time with her four children, six grandchildren, and four great-grandchildren.

Mazel tov, Renee, one of our 8ish Over 80 honorees.